Disaster management as a tool for peace in Kashmir

Shafat Ahmed works to develop the peacebuilding skills and awareness of communities across the Kashmir Valley, Jammu and Ladkh on the Indian-administered side of Kashmir. 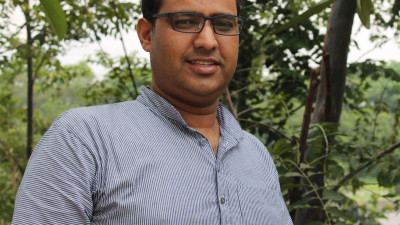 For the past six years, the fellowship has brought together Kashmiris from both the Indian and Pakistani administered regions of Kashmir. This creates a space for discussion and often profound transformation of the Fellows’ approach to, and understanding of, the conflict.

Shafat Ahmed works to develop the peacebuilding skills and awareness of communities across the Kashmir Valley, Jammu and Ladkh on the Indian-administered side of Kashmir. He has run workshops to involve women in peacebuilding and most recently led work on conflict sensitive disaster management. He participated in a disaster preparedness and conflict fellowship in Summer 2015.

When the focus of governments is on political tensions, the issue of disaster preparedness takes a back seat. Disasters are happening often at a low level across different regions. However, previously I couldn't see much networking, preparedness or mitigation.

How has undertaking this fellowship impacted you personally?

Through my work I’m in touch with people at the grassroots level, in diverse areas. This experience in London, added not only to my knowledge but also my approach – I learnt to develop critical thinking around the issues. I have since engaged people by exploring common issues, and seen how disaster preparedness can bring people from different ideologies together. As a result, I have built strong-enough relationships with people to be comfortable having ‘difficult’ conversations.

I had volunteered following the earthquake in 2005 and then also been in Kashmir during the severe flooding of 2014. Both of these disasters were fresh in my memory. Reflecting on this fellowship provided me with answers to certain questions – how we could have worked better following these disasters and how we could have done things differently to mitigate tensions and prevent certain things from happening.

What specifically did you gain from this fellowship?

The fellowship focused on understanding disasters in conflict situations, including understanding ways that disasters affect men and women differently. We looked at the issues and approaches that can be adapted to mitigate suffering, such as ‘do no harm’ principles and practices – so that disasters do not exacerbate conflict situations. We explored how to develop relationships, resilient communities, technological improvements and the possibilities of developing early warning systems.

Part of the visit included a trip to Scotland, following their referendum on independence. We met parliamentarians, professors and civil society and discussed the things that happened there. It was interesting to see that despite differences of opinion, there was no violence during the referendum. People were totally divided but seeing how the parties conducted this process and did not allow things to escalate to violence was inspiring. We talked to people who had worked with communities on reconciliation. Professor Christine Bell shared how processes around conflict issues have been debated, and how they have involved different groups of people in peacebuilding work.

On the fellowship, we met with crisis experts on epidemics as well as natural disasters. We learnt from the post-Ebola situation in West Africa – how conflict factors were exacerbated by the epidemic, but also how the people in the border areas have cooperated and used responding to the crisis as a way to better connect. As well as learning about gender and disasters, we explored how regional cooperation has worked and looked at the possibilities for cooperation inside countries. This included looking at examples of consortia which have been set up for mitigating disasters.

How have you applied what you learnt to your work?

Militarised areas such as along the Line of Control (LoC), which are far from the capitals, are more vulnerable. The fellowship helped us to focus on what can be done and demonstrated the possibility for dialogue and cooperation across the LoC. It showed how joint preparations could help and how academic institutions and the scientific community could cooperate. These regions face similar threats, and disasters on the Pakistan-administered side of Kashmir definitely impact the Indian-administered side, and vice versa.

We have since undertaken advocacy around the issues of conflict and disaster management. A direct outcome of the fellowship was the production of a policy brief – Bridging the divide, which we presented to policymakers. The reaction was good and we were able to talk about the practical uses, and work at a community level – which is something that governments, general public and civil society can all engage with. Disaster is a threat but not to people’s political positions, and more effective responses to disasters are a very practical approach which could improve the humanitarian situation and save lives. We have also shared our learning with many others who have taken it seriously, including experts in universities, resource people and civil society.

More from the Commonwealth Fellows